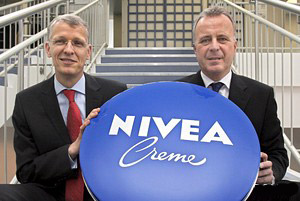 The famous cream NIVEA was created in 1911 by chemist Oscar Troplovits Germany and appeared on the market in Germany, Britain and Austria early in 1912

Mythical blue box originally is .. yellow, adorned with green garland, inspired by the new art at that time. Lily whose delicate scent of citrus, lavender, rose, lily of the valley, lilac and musk, it quickly becomes popular, invaded France in 1932 was only in 1972, appears the blue metal box, but its nature does not stop changes graphic design, and modernize the work of famous artists such as Claire and Kiraz Bretesher Chachnil Fifi. The products are also evolving. Troplovits initiated the establishment of a cream that contains the ingredient Eucerit, emulsifier produced from lanolin. Its lipid components and formula, make it strong moisturizing cream that can be used morning and night by small and large. And all this possible bargains.