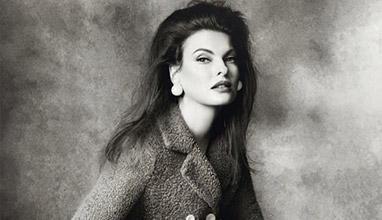 Linda Evangelista is the new face of Moschino

The supermodel Linda Evangelista is the new face of the Italian fashion house Moschino, reports ContactMusic.

A few months ago it became clear that the model Linda Evangelista will be the face of the new perfume of the luxury brand "Loewe".

The supermodel Linda Evangelista is shot by the photographer Steven Klein, styled by Edward Enninful for the September 2012 issue of W Magazine.

The 47-year star poses dressed like a superhero. Her head styling is made by Julien d’Ys. Makeup by Peter Philips for Chanel. Set design by Jack Flanagan at the Magnet Agency.

Christy Turlington is the new face of Yves Saint Laurent

The 40-year-old supermodel will front the fashion house's upcoming Autumn/Winter campaign, taking over from German beauty Claudia Schiffer, who starred in their most recent series of advertisements.

Her latest pictures, which were taken by photographers Inez van Lamsweerde and Vinoodh Matadin, will appear in fashion magazines from later this month.

The 39-year-old star was questioned at a Paris police station after calling the medic and reportedly demanding for a previous operation to be reversed.

A detective said: "She was screaming and shouting about the operation and became extremely threatening. There were repeated calls to the female surgeon who was extremely scared. The suspect is being interviewed."

Karen was arrested at about 10am yesterday (30.06.09) and taken to a station in the fashion district of the French capital city.

The Canadian supermodel - who fronted last year's Prada Fall campaign and is the current face of L'Oreal Paris cosmetics - has learnt so many beauty tricks during her 30-year career she only takes a few minutes to perfect her appearance.

She said: "I did my own make-up this morning and it takes 10 minutes, tops! My best trick is to do it in natural light. I keep all my make-up on a huge mirrored tray and I just take it to whatever window is looking good that day."